A short drive from the French colonial town of Prairie du Rocher on the Mississippi river floodplain is Fort de Chartres. The fort boasts a summer reenactment called the Rendezvous (although it would be hard to beat Lafayette, Indiana’s “Feast of the Hunter’s Moon” with its French voyageurs) as well as a traditional French  New Year’s Eve celebration called la Guignonee.

My way with architecture is to try to interact with it in some way.   This fort is incredibly photogenic and I scampered all over trying to capture with the camera what the eye was seeing. After a shot of the flood plain with ripe cornfields and the river road bluffs in the background, the photographs follow roughly my path through the fort: 1) next to parking lot at the side of the fort, the cannon with  Dolphin handles and writing in French 2) the entrance in the center of the front wall 3) officers barracks in the back where the museum is and where the winter festival is held, cart, some back buildings with oven 4) the little building with the buttresses and peaked roof  is the ammunition storage which is thought to be the oldest building in Illinois 5) a small turret (?) on the corner and some views through various windows 6) the sheltered platform over the front entrance with great views of the whole fort 7) plaques with explanations in French and English 8﴿ the front of the fort taken from the road.

Prairie du Rocher, along with the neighboring Fort de Chartres, was perhaps the earliest French center in Illinois. It is still known for keeping the French custom of la Guignonee (ghee-OH-nay), a New Year’s Eve wassailing tradition where costumed groups (including some college professors), go door to door singing for drinks. “We would start at the priest’s house”, said one long-time participant, “so he wouldn’t see how drunk we were after visiting the other houses.” A public celebration, with costumed dancers and fiddlers, is held at the nearby fort.

You can cross over to “Rocher”  on the Ste. Genevieve ferry, or go the long way around and cross the Mississippi at the bridge at Chester.

The town boasts a church, a bar, an American Legion Hall, and the Creole House, with the long porch and post-in-ground French architecture typical of the era.

The town and nearby fort are protected from seasonal flooding by levies with gates that can be closed. 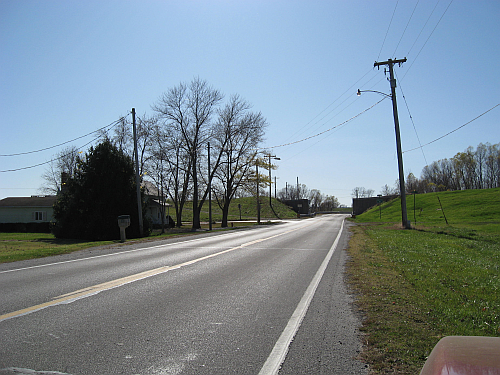 Bluffs line the sides of the Mississippi.

A short drive along the bluff road leads to the historic home of Pierre Menard, a wealthy French Canadian fur trader and the first Lieutenant Governor of Illinois. The earthworks marking the site of Fort Kaskaskia are above the house, and can be reached by a wooden stairway.

“Rocher” is also famous for its annual summer “rendezvous” historical reenactment at nearby Fort de Chartres.   The bicentennial was perhaps the largest; here is a newspaper with a photo of the 1976 crowd on Rocher’s main street. 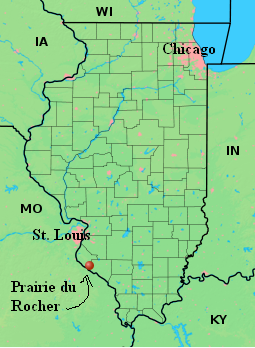 The French in Illinois: Fort Kaskaskia

This is the fort that never was. The French Fort Chartres and the corresponding town of Prairie du Rocher are a few miles away down on the flood plain, these days protected by a series of levies.

A sign tells the history of how the “fort” changed hands between the various nations: 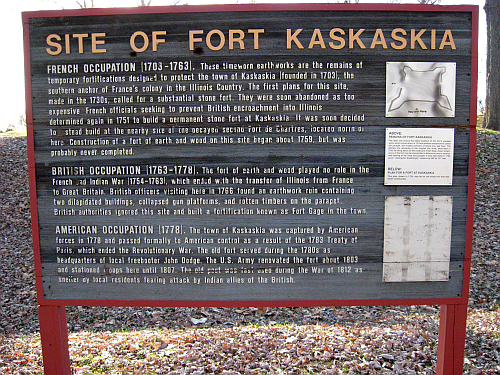 French Occupation (1703-1763). These timeworn earthworks are the remains of temporary fortifications designed to protect the town of Kaskaskia (founded in 1703), the southern anchor of France’s colony in the Illinois country. the first plans for this site, made in the 1730s, called for a substantial stone fort. They were soon abandoned as too expensive. French officials seeking to prevent British encroachment into Illinois determined again in 1751 to build a permanent stone fort at Kaskaskia. It was soon decided to instead build at the nearby site of the decayed second Fort de Chartres, located north of here. construction of a fort of earth and wood on this site began about 1759, but was probably never completed.
British Occupation (1763-1776). The fort of earth and wood played no role in the French and Indian Wars (1754-1763), which ended with the transfer of Illinois from France to Great Britain. British officers visiting here in 1766 found an earth work ruin containing two dilapidated buildings, collapsed gun platforms, and rotten timbers on the parapet. British authorities ignored this site and built a fortification known as Fort Gage in the town.
American Occupation (1778). The town of Kaskaskia was captured by American fores in 1778 and passed formally to American control as a result of the 1783 Treaty of Paris, which ended the Revolutionary War. The old fort served during the 1780s as headquarters of local freebooter John Dodge. The U.S. Army renovated the fort about 1803 and stationed troops here until 1807. The old post was last used during the War of 1812 as shelter by local residents fearing attack by Indian allies of the British.

It does have a commanding view of the river.

When Lewis and Clark traveled through this area, they recruited several of the fort’s soldiers for their expedition: 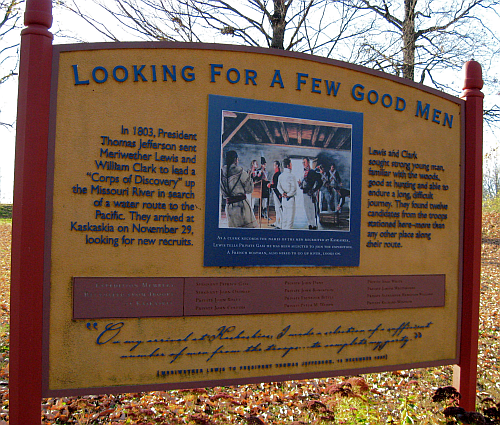 Looking For A Few Good Men. In 1803, President Thomas Jefferson sent Meriwether Lewis and William Clark to lead a “Corps of Discovery” up the Missouri river in search of a water route to the pacific. They arrived at Kaskaskia on November 29, looking for new recruits. Lewis and Clark sought strong young men, familiar with the woods, good at hunting and able to endure a long, difficult journey. they found twelve candidates from the troops stationed here–more than any other place along their route. “On my arrival at Kaskaskia, I made a selection of a sufficient number of men from the troops…to complete my party.” (Meriwether Lewis to President Thomas Jefferson 19 December 1803)

Posted in Illinois. Comments Off on The French in Illinois: Fort Kaskaskia 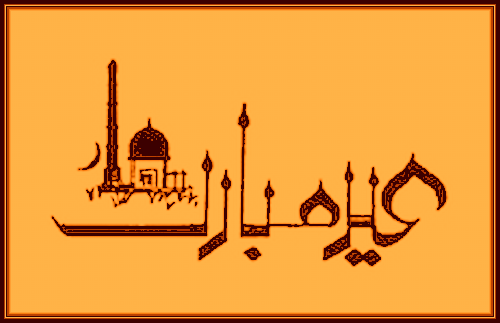 Today is Eid al-Adha, the “greater Eid”, to honor those returning from a Mecca pilgrimage, as distinguished from the “lesser Eid”, the three day party following the month of Ramadan.  The graphic says “Eid Mubarak” عيد مبارك (blessed Eid) in Arabic and is adapted from a design from artist Salma Arastu (link to her website).

A quick glance at some mosque websites shows Adams Center in DC is collecting donations for a relief fund for the families of the victims at Fort Hood.  Why am I not surprised. (The button for prayer times in my right sidebar is a link to Adams.)

My local mosque?  The last time I heard, they were collecting donations to pay for a billboard to try to convert people to their religion.  And I thought Moslems weren’t supposed to proselytize.  Tsk.

Posted in Islam. Comments Off on Blessed Eid

The snow promised for Thanksgiving Day hasn’t materialized. Yes, that’s a squirrel on the ground under the bird feeder.

Time for a walk.

Mostly the streets are the same concrete surface. 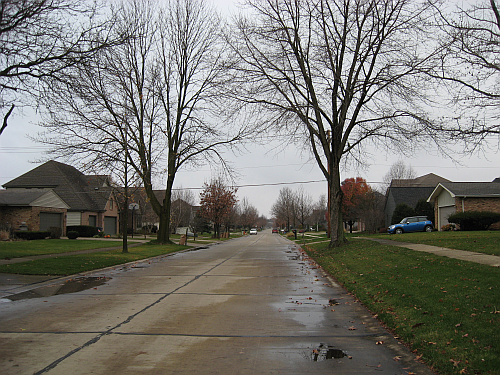 This area of Illinois is somewhat south of Chicago and enjoys a slightly longer growing season, as well as some unfamiliar (and familiar) plants.
Pumpkins.

The odd fruits of the Osage Orange, a shrub useful for non-decaying fence posts and hedgerows. The wood’s high oil, wax and silica content mean it will take a polish well, but is rarely used for woodworking since the silica also dulls saw blades and makes the sawdust toxic–you need a dust mask to work it. 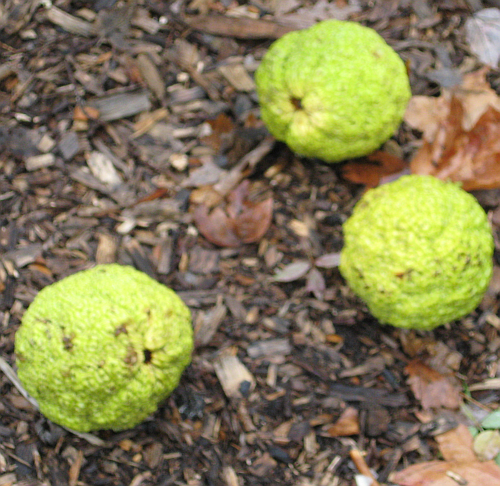 Finally there is a boring park,…

…and a boring gated community.

After several days of eating someone else’s low sodium cardiac diet, not to mention having access to an indoor bicycle machine, I feel great.  But this is not really my milieu; I don’t feel at home here.  Nice for a day or two, no longer.

Posted in Health. Comments Off on Suburbia walk

I have no idea what makes a free library free–in the U.S. nobody pays to borrow books–but here is a library free enough to put the word in its name.

A certain percentage of a building’s budget now has to be spent on public art, so here is the obligatory statue:

One thing this library has that I have never seen before (outside of a Borders bookstore) is a coffee area. More libraries should be like this.

Yet another hospital waiting room. “This is about as interesting as watching paint dry.”

A quick search with the laptop turned up an “unnamed” unsecured “guest” router that could only have belonged to the hospital. But what mischief is this? Google translate is blocked! This is too bizarre a claim not to be true, but here is the screenshot.

I never knew Google Translate was such a troublemaker.