From time to time I have had Creole speaking students in my class–and it has always been the fastest language group to drop out of my classes–but this year, since the earthquake in Haiti, there have been quite a few more. My Spanish is good enough for the Hispanic teachers to call me “compadre” and for non-bilingual administrators to freak out about my use of Spanish in the classroom, but trying to teach the Haitian students is a challenge.

For example, past tense.

you tout te [yo too tay]

Notice the French nous with the silent “s” becomes nou in Creole.

So far so good, but the problem is that the Haitian students speak Creole, but they read French. Sort of. As far as I can tell, their dictionary skills aren’t good either, so there goes comprehension. And there’s no point in trying to look for a Creole dictionary, because they can’t read Creole, since it wasn’t taught in Haiti until around the 1980’s.

Posted in language. Comments Off on Creole blues

Falling in love with love: Dostoyevsky and Rumi

I usually read in one of two rooms, the book room, or what other people might call a living room, when I’m trying not to nod off over a book, and in the bedroom, when I’m trying to get drowsy enough to fall asleep.  Yesterday, at the same time I happened to pick up Ergin and Johnson’s translation of The Rubais of Rumi: Insane with Love in one room, I finished reading Andrew MacAndrew’s translation of Fyodor Dostoyevsky’s 1848 short story “White Nights”  in the other. [text in English]  Both have a sort of meta description of how being in love can transform the external world.

Dostoyevsky’s character, described as “a dreamer”,  has his world changed by love, but it changes back again.  He is falling in love with someone  waiting to rendezvous with her fiancé after a separation, but the man doesn’t arrive at the prearranged meeting place.  The dreamer tries to describe to her how his world was transformed after meeting her:

Then I woke up.  About an hour before I was to meet you.  But I felt I hadn’t slept at all.  I didn’t know what was happening to me.  It was as if time had stopped and one sensation, one feeling would remain in me from then on; as if one minute was going to stretch out into eternity; as if life would stop and stand still for me.  I  was gong to tell you all this as soon as we met.  When I woke up, I was under the impression that some sweet melody heard somewhere long ago and since forgotten, had come back to me how, that for all these years, I’d been searching for it, l0nging for it, but only now–

[SPOILER ALERT] Maybe the title, “White Nights”, is some sort of clue to Dostoyevsky’s philosophy, since the white nights are the evenings when he meets the woman and walks around Petersburg with her.  At the end, when the original suitor finally turns up at the meeting place, Dostoyevsky’s character says “My nights were over.”

And when I looked out of the window, I don’t know why, but the house opposite turned dimmer too, the plaster on its columns fell off, the cornices became all grimy and full of cracks, and the walls, which used to be dark yellow, turned grayish.

Nights are usually thought of as dark, not white, so was the dreamer’s previous enamored emotional state simply an illusion?  Or is the actual illusion the newly grayed buildings of the out-of-love dreamer?

Rumi’s world also changes with love, but when he loses his Friend, his world does not change back.  He uses the experience to seek out whatever it is within himself that has been created by the experience.

a spark from your fire

waters of joy fell from your words

into the river of my heart

but now I understand:

that water was mirage

everything has been a dream

Jelaludin Rumi was a 12th century Sufi mystic who wrote 12-bar Persian poems on the same style of Omar al-Khayyam from a century earlier, a style that has been compared to the roadhouse tradition of the rhyming patterns and chord changes of Robert Johnson and Blind Lemon Jefferson.

there is a plain beyond Islam and infidelity both

our love rests in the middle of that plain

that’s where the sage goes to bow down

because there’s no room there for either the

believer or the infidel

you are a volume in the divine book

a mirror to the power that created the universe

whatever you want, ask it of yourself

whatever you’re looking for can only be found

Rumi went searching for his friend Shems (presumably murdered) as far as Damascus, a play on words, as the nickname for Damascus is Shems شمس (sun).  At Abdali bus station in Amman you can hear the cab drivers for Syria try to drum up business by calling “shem-shem-shem”.

From the translator’s comments:

…on a human level, how could you not fall in love with a friend who came into you life and sparked something in you that took you both to God? In that Rumi viewed the person of Shams as the actual link through which  he was able to reconnect himself back to the energies of God, the boundaries between real people and their divine counterparts are blurry ones indeed.

This looks like an interesting Rumi book to have: Rending the veil: literal and poetic translations of Rumi…short review: “This translation gives you a smooth English rendition, a beautiful calligraphic version, a structural, word-by-word English explanation, as well as a romanized version of the original language. “

Posted in Books. Comments Off on Falling in love with love: Dostoyevsky and Rumi

After having Ruth Rendell recommended to me, I finally found a copy of one of her Inspector Wexford whodunits last week, An Unkindness of Ravens, published in 1985, and have finished it off.  Maybe I was expecting too much, another Sherlock Holmes with all the dashing about by horse-drawn taxis, or Fu Manchu with the bizarre and deadly Asian flora and fauna, or even something camp like Mickey Spillane with all the corny cliches–for some reason, just the macho-pretentious title “My gun is quick” sends me into a fit of hysterical giggles.  But Rendell was a bit of a disappointment.

Technically, she’s okay, on par with Ellery Queen, but probably not with Agatha Christie.  Still, the book was readable, and maybe someone who was more into the genre would enjoy it more than I did.  Probably the most enjoyably quirky thing about it was the continuous references to paint colors manufactured by the company that employed the first murder victim:

The main bedroom was like his own in size and proportions.  The walls were even painted in the same color as his own, Sevenstar emulsion Orange Blossom.  There the resemblance ended.

But even though I have been in England, the scenes just didn’t come alive for me. I couldn’t seem to picture the forests, the suburban houses, the streets, the characters… any of it.  Worse, Rendell is known for using psychological themes, and those were a disappointment as well.  They didn’t seem to be incorporated into the narrative, just tacked on to the end.  As someone who has both worked in psych facilities and social work venues, and racked up an embarrassing number of credit hours in the subject, it didn’t ring true at all.  Rendell seems to take Freud as gospel, which even in 1985  wasn’t that common, and uses the case of Anna O to discredit those who report sexual predators, a red light to anyone who has been a mandated reporter, even before the official coverup of priestly misdeeds became known.

The other psychological twist involves folie a deux, (at the very end, with no foreshadowing) which Rendell defines as “a kind of madness that overtakes two people only when they are together…you’ll always find one party who is easily led and one who is dominant.”  Interesting, but probably not worth reading the whole book to find out about it.  I should probably just stick with Graham Greene.

Posted in Books. Comments Off on Rendell whodunit

If you just want to poke around Amharic a little bit, have fun with the language, and see some interesting visuals, you might want to start out with this blog, Road to Ethiopia, written by a student of Amharic language.

[Amharic is one of the three major languages of Ethiopia along with Oromo in the south and Tigrigna in the north.   It’s also the official governmental language of Ethiopia.]

Image (above): Ethiopian coffee ritual with charcoal burner and incense, woman has traditional braids and is wearing traditional white dress with woven border, painted on leather.

Here are the more utilitarian links:

Amharic keyboard and font to download (scroll down for font)

(to start using font, close the browser and open again; this website has an Amharic “welcome” message you will be able to see if your font is working) 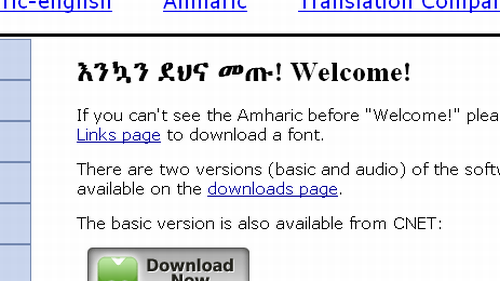 Road to Ethiopia, blog written by a student of Amharic language

Image below: Ethiopian leather healing scroll, for curing disease.  The initial image on the scroll is the archangel Micheal with his sword, a very popular motif in Ethiopian religious art.  The language is probably Geez, used only for religious purposes. 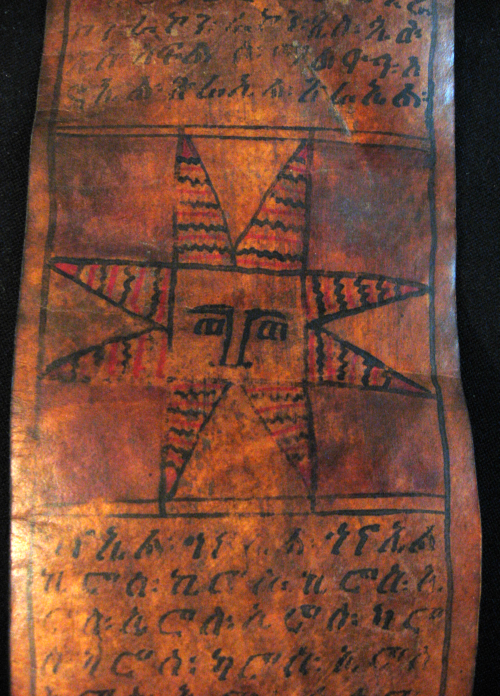 Posted in language. Comments Off on Amharic resources

The evening of my birthday found me on the beach at Indiana Dunes National Lakeshore.

Twenty-four hours earlier, storms had ripped through this area, spawning tornadoes though the Illinois Kankakee river valley, then moving on to Michigan, where a nuclear reactor on the outskirts of Detroit was shut down as the storm passed. But on my birthday, all was quiet on the South Shore.

To the left, in the far distance, the sun sets over the Chicago skyline. To the right is the cooling tower of the power plant at Michigan City, Indiana, some two miles down the beach. And at the water’s edge, there is nothing but the hypnotic sound of the waves.

In the woods, a whippoorwill at dusk. (You might need high quality external speakers to hear it.)

Posted in Travel. Comments Off on South Shore

Happy birthday to me.

Already I have a birthday present–some pepper plants a neighbor gave me. Here is the garden before:

Here is the garden after, with cucumbers and peppers, also some climbing sweet peas and hyacinths. 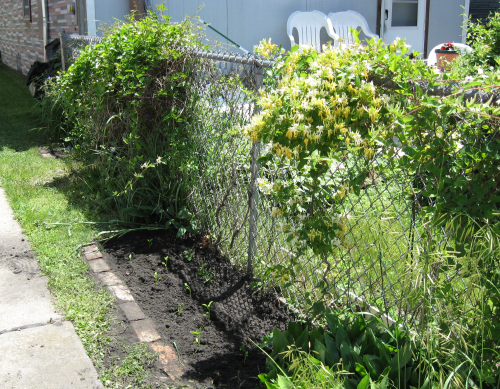 Then we went to Hyde Park for the art fair and coffee.  Turns out my neighbor is into scientology, and talks to spirits. His girlfriend just died not too long ago.

Did you know Frank Lloyd Wright came from a planet where two-headed naked penguins are the dominant species? Naked meaning no feathers and two heads for faster thought processing. (Two heads are better than one.) I had never heard of this before.

And my birthday isn’t over yet.

It’s still gardening season, but the rain has driven me indoors today. No matter, here is the perfect breakfast, using the labneh (yogurt spread) I made yesterday and pita bread (hobez) خبز folded the bedouin way, along with a little Italian decaffeinated espresso and heart-healthy evaporated milk instead of cream.

The bread was taken from the freezer and defrosted for 40 seconds in the microwave.  Then a few seconds on the stove over a flame.

For dipping, the bedouin way with bread is to tear off a piece and fold it with one hand–remember that bread and water are sacred and accepted with the right hand only. The end result has ideally three folds and is folded something like an envelope. The children are very good at this, turning and folding simultaneously with the same hand. 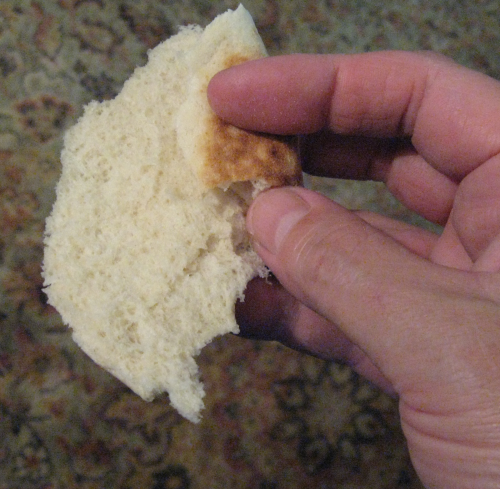 Then use it to scoop up some labneh. Yum. Here it’s had a little olive oil dribbled over it, although I’ve only see it eaten plain.