Separation of church and state: Keep atheists out of religion

I was intrigued to see the following sign near the state capitol building in Denver: 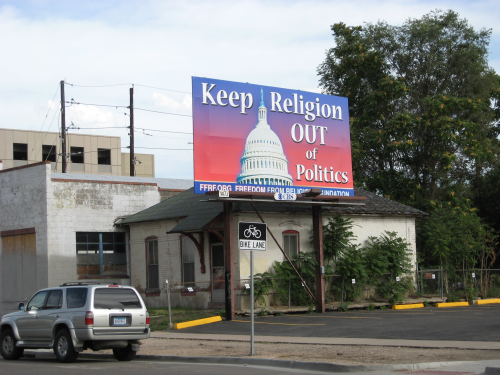 I like the idea of separation of church and state. Our current President has injected way too much of his personal religion into the government, not to mention funding them with public monies. And the newest batch of presidential candidates are falling all over themselves trying to pander to various religious, and especially evangelical groups. I say let’s put religion back where it belongs–in churches.

So when I looked up this organization I was expecting to find something high minded that I could agree with. Instead I found an organization that apparently exists to try to discredit religion, especially Christianity. Case in point: a few months before the convention, this sign in Denver had read “Imagine no religion”.

Going a little bit further, if you look at their little quiz called “What Do You Really Know about the Bible”, you will find an interpretation of Christianity that is a caricature of real churches and real Christians. For instance, here is question number 2, along with the supposed answer:

2. What is the penalty for working on the Sabbath?
Answer: A

1. You will be stoned to death. –Isn’t this an excessively violent punishment from a supposedly “Good Book?” What is the harm in working on the Sabbath? It seems the only harm is to the ego of the Sovereign, who demands respect with no respect to human needs.

“Six days shall work be done, but on the seventh day there shall be to you an holy day, a sabbath of rest to the Lord: whoseoever doeth work therein shall be put to death. Ye shall kindle no fire throughout your habitations upon the sabbath day.” (Exodus 35:2) For the chilling application of this law, see Numbers 15:32-36, where a man who picked up sticks on the sabbath was stoned, “and he died; as the Lord commanded Moses.”

Anyone who can nap in the back of a church for six weeks or so should be able to see the problem with that answer. First of all, like most of the website’s other answers this one is conveniently from the Old Testament. The last time I checked, people who followed the Old Testament were called Jews, not Christians.

Second, it completely ignores the quarrels Jesus and his disciples had with the Jewish authorities over this very question of doing work on the sabbath. After all, they were known to gather grain to eat on the sabbath and Jesus was once accused of healing on the sabbath.  Jesus wasted no time in telling off these religious leaders and calling them hypocrites. But maybe that wouldn’t fit in with the narrative the “Freedom from religion” website has decided to put out with whatever ax they are trying to grind.