Already this morning I had a creepy comment. Someone with the handle “Buzzometer” left a message saying:

If only this was real!

Now this isn’t exactly a political blog. Sometimes something about politics catches my eye and has enough depth to write about it, but only when it intersects with culture or language or the general topic of understanding between divergent groups of people. When I wrote about Barack Obama’s church, long before it became popular to do so, and then wrote about it again after attending a service, I got a range of comments, some of them difficult to process, but all of them sincere.  Many had strenuous disagreements, but none of them said they wished Obama dead.

So who exactly is this “Buzzometer”? A quick check of Arin’s Whois shows an IP address from Comcast in Mount Laurel, New Jersey. And another search shows the IP is listed on a spam database. Spammers, huh. But even more interesting, he left his blog address and his email address, even though none of that is required to post a comment. Apparently he (yes, the name is male) doesn’t see anything at all wrong with what he is saying and isn’t worried in the least about having his name associated with that comment.

Oh, and the website?  Well, I’m happy to say that although he left a link, absolutely NOBODY has clicked on it.  But just for giggles, if someone were to click on it this is what they would see.  The title “Buzzometer (DOT)net” , and the subtitle “internet buzz, measured rectally”.  Yeah, I bet. It’s nothing but a series of polls. Clicking through one of the polls will lead you to an advertisement, the same one, no matter which poll you click : 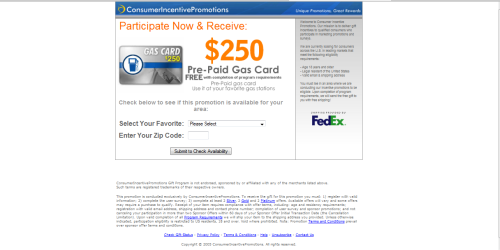 And who are the corporate sponsors for this little gem of a website (whose archives go back a whole two months)? One is Consumer Incentive Promotions with an address in Davie, FL. The other appears to be FedEx, whose name is also featured prominently on the page.

I wonder if either Consumer Incentive Promotions or FedEx is aware that someone is using their corporate brands to wish for a genuine Sarah Palin lynching.

Lynching Sarah Palin? Not “intense”–it’s only a white woman. 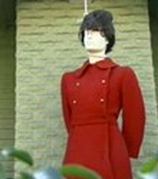 Whatever you think of Sarah Palin’s politics, there is no excuse for the hate speech that has been unleashed against her.   The latest is some guy in West Hollywood, California, Chad Michael Morrisette, who thinks hanging Sarah Palin with a noose makes for good art.  Is anyone else as dumbfounded by this as I am?  Here is the link.

Listen to the video too. The guy who put it up, Chad Michael Morrisette, says:

I am thinking of one person who has the eloquence to talk about this disgraceful episode in the way it deserves to be talked about.

A year ago, a certain candidate for president stood up for justice in Jena , Alabama :

Today I stand with those who stand for justice in Jena. The thousands of Americans from every race and region who have descended on this small Louisiana town carry forth the legacy of all those who sat at lunch counters and took freedom rides to strike a blow against injustice wherever it may exist. When a noose hangs from a schoolyard tree in the 21st century and young men are treated in a way that is not equal nor just, it is not just an offense to the people of Jena or to the African-American community, it is an offense to the ideals we hold as Americans. I renew my call for the District Attorney to drop the excessive charges filed in this case, and I will continue my decades-long fight against injustice and division as President.

Yes, it was Barack Obama who uttered those words.

During the last presidential debate John McCain was asked whether he approved of threats that Barack Obama said were shouted at his rallies (the accusation was later found to be untrue). McCain unequivocally said he did not.

Then McCain brought up the t-shirts (language alert) with degrading slogans (NSFW) worn by Obama’s fans. Obama talked and talked around the issue, but could not bring himself to say he did not approve.

Now imagine this scenario–Obama makes the following statement about the Sarah Palin noose:

When a noose hangs from the roof of a house in the 21st century and young women are treated in a way that is not equal nor just, it is not just an offense to the people of West California or to the women and girls of this nation, it is an offense to the ideals we hold as Americans.

Does anyone think Barack Obama is ready to utter these words as part of his  “decades-long fight against injustice and division” this time? Will Barack Obama stand with those who stand for justice? 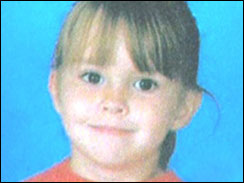 UPDATE: The contempt for women behind this display is especially poignant since the last person to die in a lynching assault in this country was actually female–6 year old Hanna Mack.